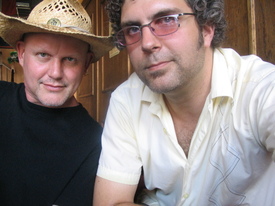 Hi there, this is Jeff. 100 Year Picnic is the music I co-wrote, recorded, produced, and mixed with my friends at my home studio in Bloomington Illinois.

I had no clue what I was doing. I just knew I wanted to do it. So at age 19, I bought a guitar and a 4-track and started figuring it out. I was primarily a drummer, but I wanted to write and record my own songs. It took me at least 10 years to write what I thought was a decent song, and that was "Someone's In the House", which I recorded on an 8-track cassette machine while my wife Cathy was upstairs pregnant with my twin babies, Lexie and Steven.

One of my very best friends and music mentors, Edwin Pierce (pictured here to the left of me), just kept encouraging me, giving me crazy production ideas and great feedback on my songs and mixes. I surprised myself and pretty much anyone else that knew me.

The first release was in 1998 under the name 10 Gallon Cat. This was a six song EP. Eventually I brought all of those songs into my first full length album As Tall As The Sky (2001).  Ed soon became my biggest collaborator, and as luck would have it, my next door neighbor. Every new song was an experiment in sound and songwriting. We would have a few drinks at night after the kids went to bed, roll 8 tracks of ADAT tape, and just make stuff up. With a sort of jazz improvisational approach to pop song production, several of these improvised tracks made their way onto Tales Of A Modern Splash (2008). This included songs like "I Don't Know What To Tell You," "Another Phase," "The Days Are Weak," and "Everything's Perfect." That's why those arrangements are so wacky, but also some of my favorites. We literally made those backing tracks up on the spot.

I think in the end this project was just about having fun, hanging with friends, having lots of laughs, experimenting and seeing what was possible to create, and making some catchy music about everyday life--all while working our day jobs and trying to do a decent job raising our families. You can often hear my kids in the songs, pulling at my shirt tail during a vocal take, and those are my kids on the album covers.

We never really got the traction we'd hoped for, but admittedly, I had no clue how that worked either... haha. It turns out you have to do things like play hundreds of shows, build a fan base that deeply believes in what you represent, engage with those fans regularly, be able to take years of rejection, have some hit songs, and write, work, and play relentlessly. I do think there are some good songs in there and definitely some fun recordings. Despite our eclectic arrangements, we did manage to win a few songwriting awards and we were featured on over 100 podcasts when podcasting was just getting started.

In the years since then, I've been busy getting my kids graduated from high school and then college. I've also spent tons of creative energy at the day job as a client-side Creative Director, helping produce over 50 national TV commercials and an Original Documentary Series with over 25 major music artists. Of course I've also continued writing and recording, including scoring music to picture and finishing an EP worth of new 100 Year Picnic songs to be released in 2019.

Anyway, however you found us, I'm thrilled you are listening on Spotify, Apple, or Amazon. Hopefully, you'll find something that's at least amusing in there, and maybe you'll put it on a playlist or share it with a friend. That would be cool. Cheers, Jeff

Jeff Greeneberg
100yearpicnic [at] gmail [dot] com
Or checkout my commercial music projects--writing for film, tv, and advertising at www.wheeliepop.com